“Mummy! Daddy’s plane, Daddy’s plane,” we screamed from the balcony at 7:00 that morning. That was the ritual every year. Daddy was landing from Dubai where he worked. He was arriving for his annual vacation back home in Delhi. He always arrived before my birthday. You could say summer vacations, but I prefer saying he came for my birthday.


Our house stood below an air route and from our balcony the airplanes, showing off their tails, were visible up close. Gulf Air, back then, had a brown, green and red tail and it crossed over at 7:00 A.M. Back in the days when the phone was an instrument of power reserved for the well connected, this was our system for time tracking.
My sister and I would wait in the balcony at 6:45 A.M. If the Qatar Airways carrier flew by at 7:00 A.M., Daddy would reach home by 9:30 A.M, after all the clearances. The delay in the flight’s arrival overhead helped us form a pro rata estimate for the honk of Daddy’s taxi below our first-floor balcony. Of course, we had our ears stuck there all the while we brushed, bathed and had breakfast indoors. In case of any delays in arrival, Mom would wait for half hour tops. After which, she would walk over to meet the lady in the corner house, whose husband worked in some Ministry and had a phone, and would make calls to trace Daddy. This happened only once in Daddy’s tenure in Dubai, though.

From the store, we bought a steel tray with gold plated inlay work, our bit of glitter from this land that held my childhood wonder.

NOTICE:
You Do NOT have the right to reprint or resell this content!
You also MAY NOT give away or sell the content herein!
© 2017 by Donna Abraham
Posted by Donna at 13:29:00 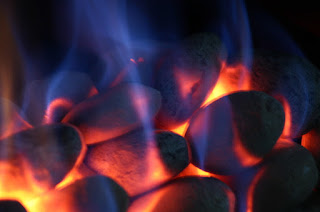